Today Jon and Rowan went to an archaeological dig in Duxbury. Volunteers, led by an archaeologist, are working on what they believe is the site of Duxbury’s second meeting house.

They found chunks of brick, flakes that could be from toolmaking, quartz, seashells, charcoal, a glass bottle fragment, two small pieces of plate glass, a large stone, and what Rowan thinks could be a partially-formed arrowhead. 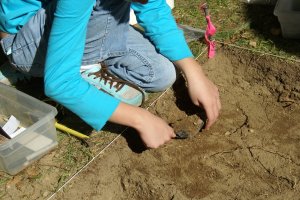 I grew up in Duxbury, in a house that was built in 1696 by the son of pilgrims. I’m glad Rowan had a chance to make her own happy historical memories there.