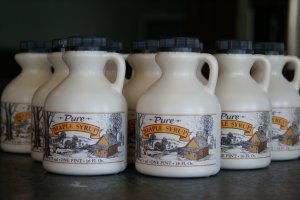 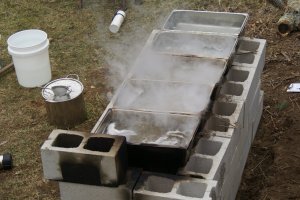 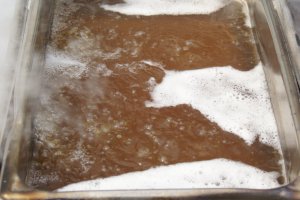 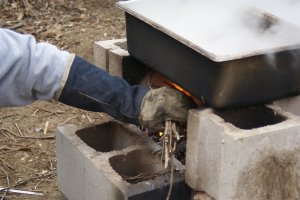 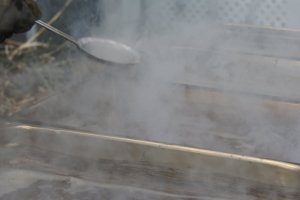 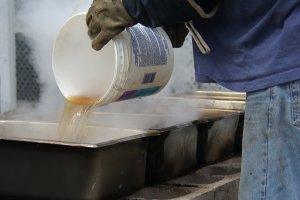 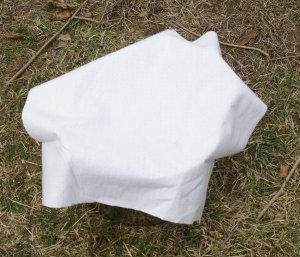 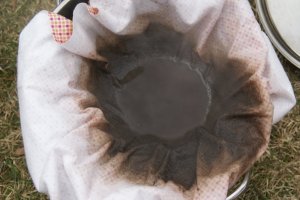 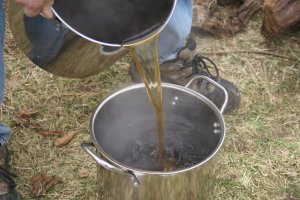 I’m going to post some pictures separately, but let me tell you something about maple syrup: it’s worth whatever ridiculous price your friendly neighborhood maple farmer wants to sell it for.

Jon got up at 7:00 and had the first batch of sap boiling by around 8:00. We worked our way through the first 45-55 gallons by somewhere around 2:00. (It’s all a blur of fire feeding, straining, pouring, and noxious smoke.) Another 20-30 gallons brought us to around 6:00. We’re left with about 20 gallons of sap that we won’t end up using. Next year we’ll either reduce the amount we collect or collect more and plan to cook for two days instead of one.

We now have three large pots of syrup in the house for a final boil, after which it’ll be filtered again and bottled.

A few notes on the process so you can understand what you’re seeing in the pictures:

First off, you might notice the chimney is gone. When Jon started the fire this morning spouts of flame shot out of the chimney in what he deemed a scary and unsafe way. Down came the chimney.

Once the sap was brown and had reduced drastically, we used flannel and a very fine strainer to filter it into large pots. You can see how dirty the flannel got. It went from white to gross very quickly, which was interesting because if you had looked at the syrup you wouldn’t have thought there was all that much to strain out of it.

More on that noxious smoke – It was blinding. Acrid. Our eyes are still burning. 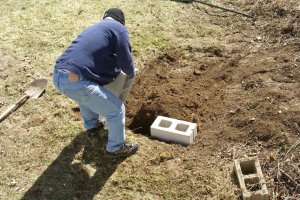 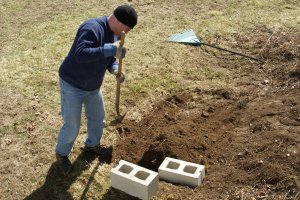 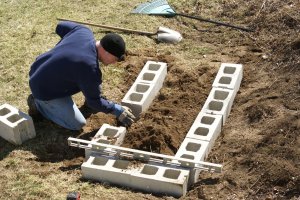 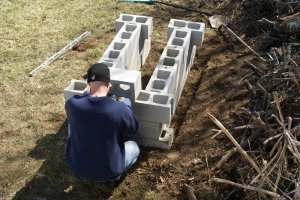 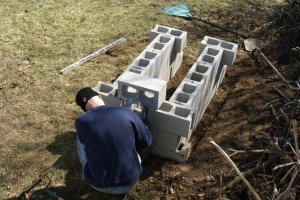 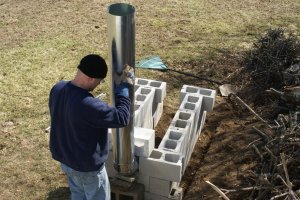 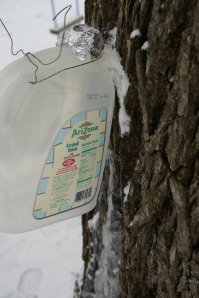 Forty gallons of sap yields about one gallon of syrup. Based on what we’ve collected so far, we’re hoping for a total of about eighty gallons of sap. Snow and colder temperatures slowed things down today, but seeing those jugs fill up yesterday was a happy sign that spring is on its way.